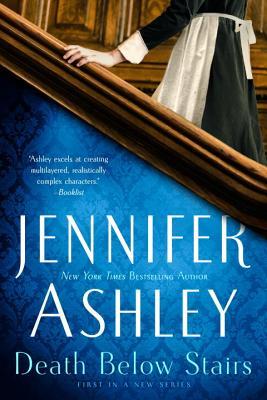 Victorian class lines are crossed when cook Kat Holloway is drawn into a murder that reaches all the way to the throne.

Highly sought-after young cook Kat Holloway takes a position in a Mayfair mansion and soon finds herself immersed in the odd household of Lord Rankin. Kat is unbothered by the family’s eccentricities as long as they stay away from her kitchen, but trouble finds its way below stairs when her young Irish assistant is murdered.

Intent on discovering who killed the helpless kitchen maid, Kat turns to the ever-capable Daniel McAdam, who is certainly much more than the charming delivery man he pretends to be. Along with the assistance of Lord Rankin’s unconventional sister-in-law and a mathematical genius, Kat and Daniel discover that the household murder was the barest tip of a plot rife with danger and treason—one that’s a threat to Queen Victoria herself.

I received an eARC at no cost from the author


Although I already knew (and loved) Jennifer Ashely as a historical romance writer, I had never read a mystery book from her, so this was my first attempt.

Our main character, Kat, is a cook with a lovely young daughter and a past. She goes to work in a house where a young girl (a scullery maid) dies. And so she decides to get Daniel’s help – he’s someone she knows from her past, but that neither she nor us know much about. And that doesn’t really change throughout the book. It might be the only thing I would like to change – I would have liked to have known just a little bit more about Daniel and his son James, but I’m guessing Jennifer Ashley will start lifting the veil a bit more in the next book.

It was full of mystery and I usually find out right away who killed whom, but in this book I was kept on the edge of my chair trying to find out who planned to kill the scullery maid. In the end, it made perfect sense, and I really enjoyed finding out what was happening alongside with Kat and Daniel.

It was a very pleasurable read, with a small touch of romance between our main characters. I can’t wait to see what happens next to our Kat, and if she and Daniel upgrade their romance status (I’m sure they will!!). 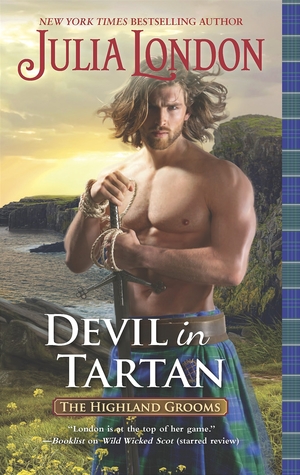 Peril and passion on enemy seas…

Lottie Livingstone bears the weight of an island on her shoulders. Under threat of losing their home, she and her clan take to the seas to sell a shipload of illegal whiskey. When an attack leaves them vulnerable, she transforms from a maiden daughter to a clever warrior. For survival, she orchestrates the siege of a rival’s ship and now holds the devilish Scottish captain Aulay Mackenzie under her command.

Tied, captive and forced to watch a stunning siren commandeer the Mackenzie ship, Aulay burns with the desire to seize control—of the ship and Lottie. He has resigned himself to a life of solitude on the open seas, but her beauty tantalizes him like nothing has before. As authorities and enemies close in, he is torn between surrendering her to justice and defending her from assailants. He’ll lose her forever, unless he’s willing to sacrifice the unimaginable…

I received an eARC at no cost from the author

Devil in Tartan is the fourth book on the Highland Grooms series, by Julia London.

Having read the first three books, it’s impossible not to make comparisons between them. Sadly, for me, this was my least favourite book.

It had an interesting premise, and I liked Aulay, but I just couldn’t connect with Lottie.

Lottie is described as strong, courageous, fearsome woman, but even if she was trying to do her best to save the (illegal) family business, she just didn’t act nor did justice to her descriptions. She was, no doubt, intelligent enough to use her pretty face to fool men, but that didn’t make me like her more – it actually made me like her less.

And Aulay, although I did like him more than Lottie, he too was a bit of an empty character. He was a painter, which I liked, but felt it wasn’t explored enough. I liked that Julia London mentioned his role in the family, how he felt, because that made me connect with him more, but it just felt like it was lacking something.

I liked revisiting characters from the previous books, but it was for such a short while that it wasn’t enough to save the book from a simple 3 star rating.

I just couldn’t connect with the characters as much as in the previous books, and I felt that with both Lottie’s crew and Aulay’s crew always around it felt a bit too crowded and there were too many characters (and sometimes I even got confused with who was whom – and I read the book in just two days, and rarely get lost in these books, but with this one it was hard to remember all the minor characters).

Julia London’s writing isn’t being put in question here, she was as good as always, I just felt like she tried to put too much in one book and ended up not focusing enough on what was really necessary. Still, it was a different read, and I managed to enjoy parts of it.