[Review] A Devil of a Duke, by Madeline Hunter 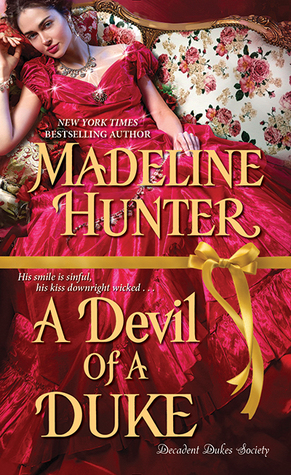 HE MAY BE A DEVIL

He's infamous, debaucherous, and known all over town for his complete disregard for scandal, and positively irresistible seductions. Gabriel St. James, Duke of Langford, is obscenely wealthy, jaw-droppingly handsome, and used to getting exactly what he wants. Until his attention is utterly captured by a woman who refuses to tell him her name, but can't help surrendering to his touch...

BUT SHE'S NO ANGEL EITHER...

Amanda Waverly is living two lives—one respectable existence as secretary to an upstanding lady, and one far more dangerous battle of wits—and willpower—with the devilish Duke. Langford may be the most tempting man she's ever met, but Amanda's got her hands full trying to escape the world of high-society crime into which she was born. And if he figures out who she really is, their sizzling passion will suddenly boil over into a much higher stakes affair...


The second book in the Decadent Dukes series brings us the story of Gabriel St. James, Duke of Langford, and Amanda Waverly, a secretary whose parents were thieves and taught her the trade – until she didn’t want to do it anymore.

Gabriel never really believed in getting married – or actually loving someone. Love for him was just an infatuation that would eventually disappear – until he met Amanda Waverly. As a simple secretary, Amanda was happy with her life, at least in most aspects. That is, until she is blackmailed to do something that could get her in jail…. or worse.

I really liked Gabriel, he was dashing and sweet, more than your regular roguish duke. He was helpful, and always there for Amanda, almost no questions asked. Amanda, on the other hand, wasn’t one of my favourite characters. I liked how she was with the ladies that wrote the Parnassus (a newspaper of sorts) but I didn’t like how she handled the situation that actually got her in danger. At the end of the book, however, she was way more likeable.

It was a pleasure to reunite with the other dukes, both Stratton and Brentworth as such amazing characters, and I can’t wait to read Brentworth’s story – I have a feeling it’s going to be the best of the series.

The plot was interesting, with theft, blackmail, and love all in the mix, but because I couldn’t connect so much with the main female character, I didn’t enjoy this book as much as the previous one. But I still recommend it, it’s a book with a good and strong hero, good friends that back up the whole story and keep the plot going by keeping the main characters mostly in line and, in the end, it’s a pleasurable read. 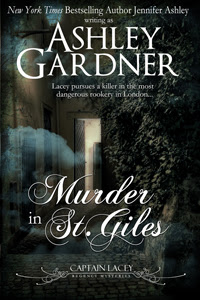 London, 1819: When Brewster, my bodyguard, comes to me about a murder of a pugilist—and what’s more, says his wife has summoned me—I must hasten to St. Giles to find a killer before Brewster is arrested for the crime.

This is made difficult because Donata's late husband’s odious cousin has materialized to try to wrest her son into his care. After all, seven-year-old Peter is a viscount, and his cousin wants to get closer to the title.

But how close? If Peter’s life is in danger, I must remain, but Brewster risks hanging for the death of his wife’s brother-in-law. He’s done too much for me to turn my back on him, but the devil if I’ll let the Breckenridge cousin get his clutches on Peter.

It will take all my perseverance, and a few wiles, to plough through these difficulties. In the meantime, I meet a Runner who teaches me about crime and punishment in this enlightened age, and Brewster’s old trainer, who made him the excellent pugilist—and thief—he is today.


Murder in St. Giles was my first Captain Lacey’s book – and I can’t wait to read the other books!

Although I do like mysteries, I usually end up a bit disappointed because I can tell right away who did what (in this case, who killed Finch). But with this book, I kept thinking “who did it? Who did it?” because I just couldn’t tell. I really enjoyed discovering the killer along with Gabriel Lacey and Brewster.

The one tiny thing I would have liked a bit more is movement. Sometimes it was a bit slow, how the story was developing, and at the end it was maybe a bit too quick. But it was very satisfying, I didn’t feel like things were left to chance, everything was very well planned, since the order of meeting the suspects, to the suspects themselves.

The subplot was also good, although I have to say I didn’t connect with Donata and her son Peter that much, but that might have to do with only meeting them now, and not in a previous book. The most important part of this subplot, for me, was showing Captain Lacey in a different light, more of a husband and father (same thing with his daughters, Anne and Gabriella), which I could appreciate.

In the end, it was a great historical mystery book, it kept me guessing and wondering and I liked most of the characters, which meant I was truly engaged with what happened to each of them. I will, definitely, return to this series and read more about Captain Lacey.