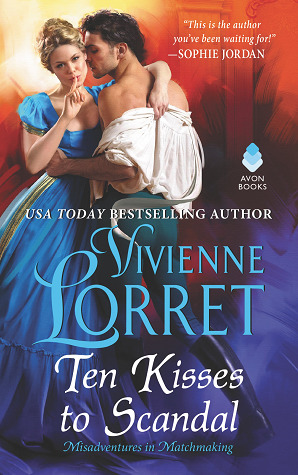 The Bourne Matrimonial Agency has one rule—never fall in love with the client. However, they never said anything about kissing a rake…

Briar Bourne’s matchmaking career could be summed up in two words—comic disaster. Unless she can learn about the irresistible forces that draw men and women together, her professional future looks rather bleak. But Briar has an intriguing plan—enlisting London’s most irredeemable rake to teach her everything he knows about attraction. Given his notorious reputation, it’s no surprise that Nicholas Blacklowe, the Earl of Edgemont, requests one thing in exchange for his tutelage. For every lesson, he wants a kiss in return. And what harm could there be in a simple kiss? After all, Briar would never fall for a scoundrel…

Nicholas has no romantic notions about love, and no intention of changing his ways. He’s only helping Briar so that she can find the perfect bride for his jilted cousin. Yet Briar is so clever, so curious, so candid—so blasted tempting—that soon, Nicholas can’t stop wondering what it might be like if he was irresistible to her.


I absolutely loved this book! While reading it, I had a happy grin on my face the whole time. It just made me laugh and tingle, and it gave me butterflies – what more could I ask for?

Briar is so adorable! She’s a romantic and, yes, she is also a bit naïve but she is so sweet! Some heroines can be a bit annoying when they are too unaware of the world, but Briar is so lovely, she made it so easy to like her, I just adored her. She has suffered her fair share, but we only know how everything has affected her almost at the end of the book, which was fine by me.

Nicholas was… so sexy! I mean… don’t ask me for a physical description because (with the exception of his nose), I probably can’t give you one. Why? Because characters in my mind, even the ones heavily described, don’t actually have a defined face..? There’s always somewhat of a blur. So no, it’s not their face/body that makes them sexy (it helps, of course!), it’s how they act, and how they can make you feel like all their attention is on you, in a good way. And that’s how I felt Nicholas was about Briar. He has other great qualities, naturally: he’s very loyal and protective of his family (like Briar), he’s been hurt before (haven’t we all? and almost every single book character?), and he’s a rake. But, who would have guessed? He’s a rake with a good heart.

Their chemistry was, at the same time, so strong and so subtle. The teasing, and the friendship, the alone moments… Everything made my senses as a reader tingle and be on the lookout for another wonderful scene.

The secondary characters help set the scene: Briar and her family have a matchmaking agency. Her friend Temperance and her brother Daniel, are looking for fiances. And their cousin is… Nicholas, Lord Edgemont. I don’t want to give too much of the story away because it’s their adventures that keep us readers paying attention. Suffice to say, Briar needs help with her matchmaking skills, and Nicholas is more than happy to help – in exchange for a little something, as one would expect.

The one thing – and, let’s be honest, it’s a small thing – that could have made this book even better, was to make the ending a bit more climatic. And I think this was lacking a bit because what was preventing the happy ending was such a small thing that seemed almost… not credible. I really liked Nicholas’ dedication to try and talk to Briar, and I have to admit I was a bit disappointed that she didn’t even give him a bit of credit – I know, she felt hurt and deceived, but after her time spent with Nicholas, I hoped she knew better. But, alas, miscommunication got in the way.

In the end, it was a great book, with only a small thing to point out. Can’t wait to read the next book in this incredible series.