[Review] A Rake's Guide to Seduction, by Caroline Linden 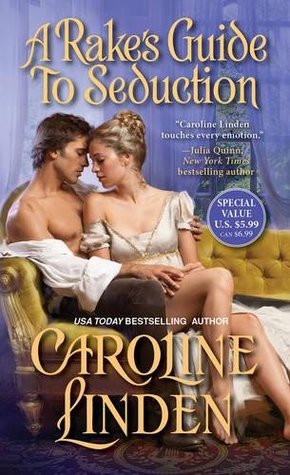 Anthony Hamilton cannot help it. The way he looks, the way he lives, his past - it all conspires to make him a man men fear, women desire. His name fills gossip circles in a seemingly endless, lurid drama. But he's never forgotten the only woman he's ever truly wanted - yet could never have.

Celia Reece knew Anthony well before he forged his scandalous reputation. The young man she remembers spoke kindly to her, made her laugh, and his devilish good looks always quickened her pulse. But Celia's mother had other designs - designs that didn't include marriage to Anthony. Now, Celia is widowed, and her mother is intent on finding her a new husband. Refusing to let any obstacle stand in his path this time, Anthony sets out to win Celia's heart by using the same skills that made him London's most irresistible rake...


This book was a bit different than most historical romances, in my opinion. I really liked that.

Anthony is the typical rogue/rake with a heart of gold for the heroine. He's there for her, he makes her laugh - he helps her become more like herself before she was married, when she was happier and more relaxed. Her mother , on the other hand, only sees him as a bad influence.

Celia is a woman who, although strong, was a hurt by life - her husband who pretty much left her alone with her father-in-law, the father-in-law who depended on them too much , the children she wanted but didn't have... and sadly she became a shell of her younger self.

Anthony helps her and he doesn't push her, which I liked. She evolves at her own pace.

I really enjoyed seeing their relationship rekindle and grow, and I became quite envolved with these characters.

Definitely another win for me with Caroline Linden.